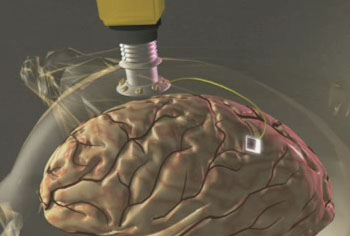 Cyberkinetics Inc has begun government approved human testing of an implant to the human brain:

The System consists of a sensor that is implanted on the motor cortex of the brain and a device that measures and interprets brain signals and translates these signals into useful computer control.

It is hoped that the BrainGate System might someday allow people unable to use their arms or hands to control a computer using their thoughts. The System could potentially be used to help increase the independence of people with disabilities by allowing them to control various devices with their thoughts. Through their control of a personal computer, users of the BrainGate System may be able to control a variety of devices to complete everyday tasks such as composing an email, answering the telephone and controlling a television.