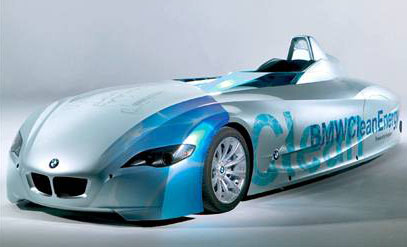 The BMW H2R has set nine world speed records for internal combustion powered vehicles using hydrogen as a fuel. The H2R has a 0-60 acceleration in under 6 seconds and a top speed of 174 mph.

The main modifications to the 760i engine involve adapting the fuel injection system to the special features and requirements of hydrogen fuel. Intake valves were enlarged, valve seat rings were modified, special hydrogen-specific injection valves were used and relocated to the intake manifold instead of the combustion chamber. Finally several engine management changes were made to tune the engine to hydrogen’s unique combustion characteristics.