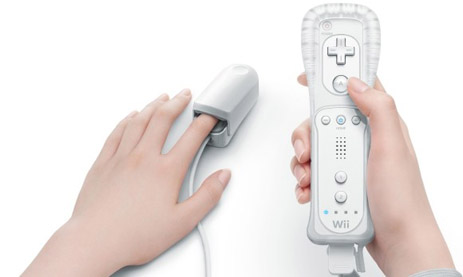 Nintendo introduces the Wii Vitality Sensor at E3 2009. The device is a pulse monitor which connects to the Wiimote port. Uncertainty surrounds the device as gamers wonder what kind of applications it has. Some possible ideas we came up with is a complement to WiiFit or WiiFit Plus to work out to your target heart rate zone, a meditation game with the goal of keeping your heart rate low and possibly some sort of lie detector for a TV game show inspired game. During Nintendo’s Q1 Q&A on July 31, 2009, Satoru Iwata (President of Nintendo) explains the concept of the Wii Vitality Sensor:

It seems like the Wii Vitality Sensor is a kind of product which we are having some difficulty in addressing its product concept. The majority of the audience at E3 responded to it like “what in the world is Nintendo planning with a single pulse meter?” A human pulse not only contains information as to how many times a heart beats in a minute, but also various kinds of information such as the condition of automatic nerve.

Traditionally, great games has made people excited and stimulated. Wii Vitality Sensor has great potential for various applications like measuring how horrified a player is in a horror title. What we are trying to propose first is a video game with a theme of relaxation, which is completely opposite from traditional ones, to enrich the users’ lives. Especially among those who are constantly busy, I am sure you have experienced not being able to go to bed even when you are so tired after a busy day at work and coming home late at night… What if you were able to visualize how to unwind and relax, or check the condition of your automatic nerve by simply inserting your finger in the device once a day? We are conducting some tests internally at Nintendo, and found some patterns among our employees, like improving automatic nerve condition as the weekend nears or vice versa. Seeing what their condition is actually like, they can “visualize” how they are looking forward to weekend. And see completely different patterns on each individual person. And I think you have all had an experience where you are not in tune with how your body is doing or aware of how exhausted you body may be in a busy, strained period, but if you can visibly measure your condition every day, you can start to see how you’re doing. It would be like stepping up on a scale every day and seeing the change of your weight. Our new challenge that is different from past software development is to make a video game by using the visible activities of your automatic nerve.

Before Wii Fit launched, everyone doubted how well it could sell. As for Wii Vitality Sensor, I think it will face similar doubts as to whether such a product will sell well in the video game market. Of course no one can tell how people respond to it before the launch. We understand everyone wants to enjoy a vibrant lifestyle, so I believe if the product could support that desire, it would make a large impact in society. We are hoping to make one such proposals a year, or every two years at best, to try and realize what no one has ever done before. As there was concern at E3 this year that people might misunderstand us as makers developing sequels only, we decided to make it (Wii Vitality Sensor) public at the media briefing. We would like to deliver the actual product not too late in the year next year. As I have mentioned, last-minute polishing is crucial for developing video games, so please understand that we’ll need to refrain from commenting on an exact release date.